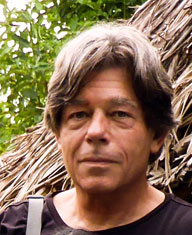 Gert studied Theology, taught some Greek, then worked as a researcher on the Jewish diaspora in Antiquity. He spent time in Delhi, living in a Hindu family and studying Buddhist Logic and Madhyamaka Philosophy on a daily basis with Geshe Palden Drakpa for some years.

Later in his life, he worked for 17 years in an adolescent psychiatry. He is married and lives with his wife Saskia in Tübingen (southern Germany). He has two children, his son lives in Delhi.

Zen became an important part of his life since the 1980s when he attended sesshins by Harada Sekkei Roshi and P. Enomiya-Lassalle. In about 1991 he became a disciple of Fr. AMASamy who has guided him since.